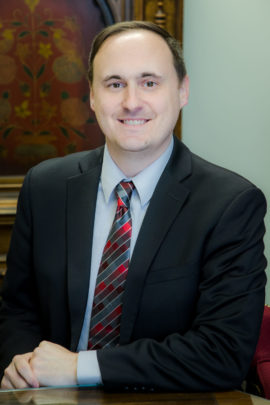 “In my years of practice, I have learned that the best method to achieving a favorable result is through effective communication between an attorney and his client. That is why I strive from the outset with clients to craft a strategy that meets their particular needs, as well as working hand-in-hand with clients on the problems they face throughout their case.”

Attorney Robert “Rob” E. Girvan, III joined the firm in August of 2016, and concentrates his practice in Commercial Litigation, Collections and Bankruptcy Law. Prior to joining the firm, Attorney Girvan practiced with a firm in Bangor, Maine, concentrating in Consumer Bankruptcy. He oversaw the second largest consumer bankruptcy practice in the state of Maine, gaining vast experience in Chapter 7, Chapter 11, Chapter 12, and Chapter 13 bankruptcies. Rob was named a Super Lawyers “Rising Star” for New England in the practice area of Consumer Bankruptcy. Rob was the only Consumer Bankruptcy attorney north of Portland, Maine, to achieve this distinction from 2014-2016. Since joining the firm, Rob has continued to represent debtors as they navigate the bankruptcy process, and also often represents creditors in Bankruptcy Court, and in state court to enforce creditors’ rights. A large portion of Attorney Girvan’s practice involves representing Chapter 7 Trustees in bankruptcy cases to recover assets and avoid transfers under the Bankruptcy Code. Rob was also named a Super Lawyers “Rising Star” in Massachusetts in the areas of Civil Litigation and Bankruptcy for 2018-2020.